2022 Gibraltar St George & the Dragon, and the Princess Sovereign Collections 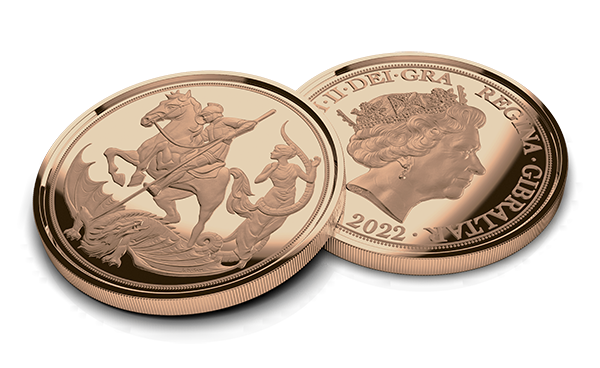 2022 Gibraltar St. George & the Dragon, and the Princess Sovereign Collections

in the year Her Majesty, Queen Elizabeth II celebrates her 70th anniversary of her accession to the throne, Tower Mint, along with the Government of Gibraltar, and Samlerhuset Group made history, with the launch of the New Pistrucci, and Remastered Maklouf.

Obverse Design: The obverse design will feature the inscription; ELIZABETH II • D • G • REGINA • GIBRALTAR, which reads as; • ELIZABETH II • BY • THE • GRACE • OF • GOD • QUEEN • OF • GIBRALTAR • surrounding the remastered Raphael Maklouf Queen Elizabeth II Effigy, created in 2022 to mark her Platinum Jubilee and 70 Glorious Years, alongside the year in which the coin is struck.

Reverse Design: In keeping with the previous editions of the Gibraltar Sovereign, the reverse designs depict the scene of St. George battling the Dragon however the 2022 design also introduces the reason for George’s heroic battle with the beast – the princess designed by Lucrezia Delfini, the winning artist of an official competition at Zecca School of Art in Rome. The quarter, half and full sovereign denomination feature a full-size image of the design, whilst the Double and Quintuple Sovereigns will also include an incuse border with the inscription in Latin ‘HONI • SOIT • QUI • MAL • Y • PENSE’, which translates to ‘SHAME • ON • HIM • WHO • THINKS • EVIL • OF • IT’.