The Saint, The Dragon, and The Sovereign 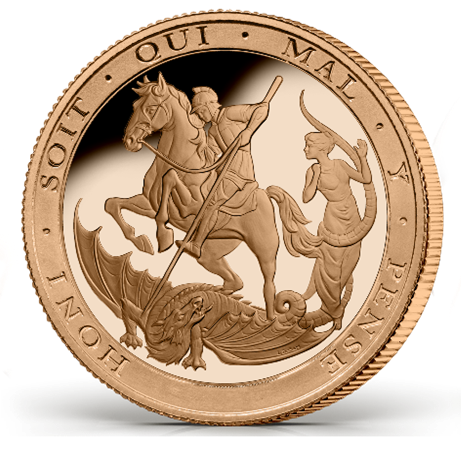 in 1816, Pole hired Pistrucci to create models for the new coinage. He created a head, in jasper, of King George III, to be used as model for the sovereign and the smaller silver coins. He had prepared a model in wax of Saint George and the Dragon for use on the crown; this was adapted for the sovereign. The Royal Mint’s engravers were not able to successfully reproduce Pistrucci’s imagery in steel, and the sculptor undertook the engraving of the dies himself.

In 2017, marking the bi-entenary of the modern Sovereign, Samlerhuset Group and Tower Mint crafted a world first, a new series of St. George & the Dragon designs, depicting the Saga, but not taken from the original artworks of Benedetto, but rather a new generation of the acclaimed Pistrucci name: Angela Pistrucci, Benedetto’s great-great-great-grand-niece created five designs depicting the battle between saint and beast.

However, in 2021, the year before Her Magjesty, Queen Elizabeth II’s milestone year, and after the completion of the saga by Angela, the future of the legacy appeared to be unknown. So where does one start when looking to find a contemporary classic, a design or an artist whose roots are firmly based in the classical work of Benedetto, but also has the youth and vibrance to create something modern yet timeless, and original yet recognisable? The answer came from the place where Benedetto studied his craft over two centuries ago, the School of the Art of Medal-making at the Istituto Poligrafico e Zecca dello Stato, in Rome. Artists and students were invited to compete in creating a winning design for the 2022 issue of Gibraltar’s St. George & the Dragon Gold and Silver Sovereign Collection. The calibre of work being so high that the 2022 winner, Lucrezia Delfini created both the gold and silver designs.

In keeping with the traditions of the Sovereign since 1489, with its Latin inscription; ELIZABETH • II • DEI • GRA REGINA • GIBRALTAR, which reads as; • ELIZABETH • II • BY • THE • GRACE • OF • GOD  QUEEN • OF • GIBRALTAR • and sizes, the New Gibraltar Sovereign design does not include a denominational value as each coin is determined by its size, weight, and diameter. The Obverse depicts the Raphael Maklouf Queen Elizabeth II effigy remastered to mark Her Majesty’s historic Platinum Jubilee in 2022.

In keeping with the previous editions of the Gibraltar Sovereign, the reverse designs depict the scene of St. George battling the Dragon, surrounded by the Latin inscription, HONI • SOIT • QUI • MAL • Y • PENSE, which translates to SHAME • ON • HIM • WHO • THINKS • EVIL • OF • IT.