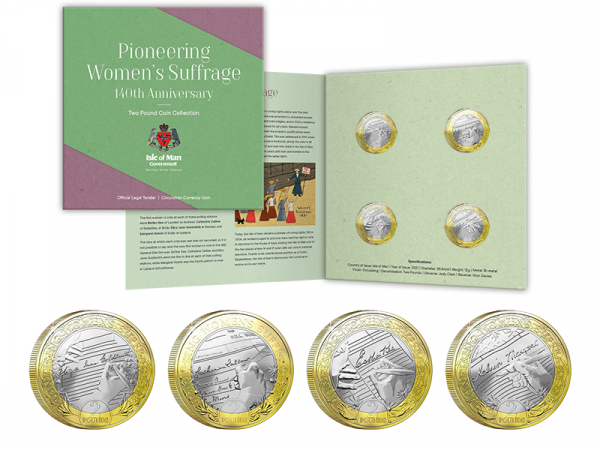 Celebrating the Isle of Man’s pioneering approach to equality and rights for Women.

The Isle of Man was the first place in the world to grant women the right to vote in a National Election. Although there were still stipulations, the passing of this into law set the foundations for a more inclusive and equal stage for both men and women. Although there was a lot still to be desired, the magnitude of the decisions made by the Members of the House of Keys would pave the way for the rest of the United Kingdom and Western society.

The collection includes several specifications, including circulating currency, which will be legal tender on the Isle of Man.

Reverse Design: The collection features the names of the four pioneering women who first cast their vote as women on the Isle of Man. The original Poll Books are held by Manx National Heritage and show the voters names documented as Eliza Jane Goldsmith, Catherine Callow, Esther Kee and Margaret Kelvin.

ISSUED BY: GOVERNMENT OF ISLE OF MAN