‘Sovereign’ is a title which can be applied to the highest leader. The word is borrowed from Old French ‘souverain’, derived from the Latin ‘superānus’, meaning “above”. In the United Kingdom, Sovereign refers to both Queen and coin representing their possession of supreme and ultimate power. The Sovereign coin as we now know it is a globally recognised and revered part of British History and represents a long history which remains intrinsically tied to royalty.

The Tudor era, infamous in many ways, also introduced the very first Sovereign Coin. In 1489, King Henry VII authorised a coin with a diameter of 42mm, weighing 15.55g, which was double the weight of the existing gold coin, the Ryal. The Spur Royal was an extremely rare English gold coin issued in the reign of King James I and was a development of the earlier Rose Noble, or Ryal which was worth ten shillings when issued by Kings Edward IV and Henry VII, and fifteen shillings when issued by Queens Mary and Elizabeth I.

The new coin was struck in response to a large influx of gold into Europe from West Africa in the 1480s, and Henry first called it the ‘double ryal’, but soon changed this to sovereign. This coin was too great in value to have any practical use in circulation, and the original sovereign was most likely a presentation piece, which we recognise today as commemorative, or bullion coins.

The English sovereign was the country’s first coin to be valued at one pound sterling [£1] and James I, when he came to the English throne in 1603, issued a sovereign in the year of his accession, but the following year after he proclaimed himself King of Great Britain and Ireland, and France, he issued a new twenty-shilling piece. This was around 10% less gold than the sovereign, and was called the ‘unite’, representing the joing of the Scottish and English crowns of King James I. 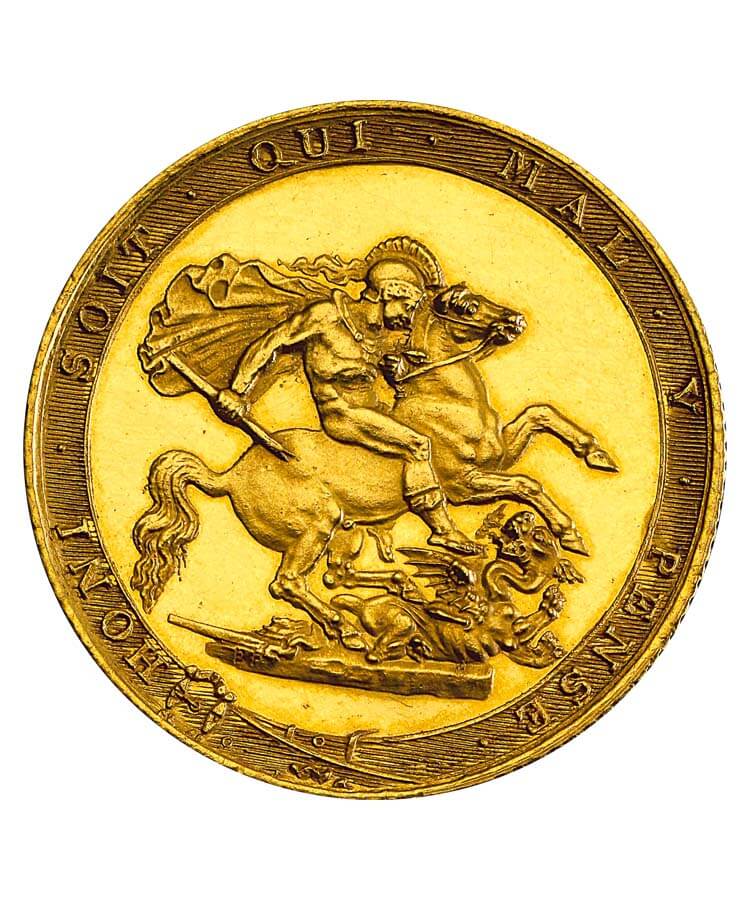 It would be more than 200 years after the introduction of the ‘unite’ that the Sovereign was reintroduced. King George III reinstated the sovereign in 1817, and the new old coin quickly became a symbol of Great Britain’s international dominance and the growth of the British Empire. This reissue laid the foundations for one of the world’s most iconic coins, the modern Sovereign.

William Wellesley Pole was appointed Master of the Mint in 1812, with a mandate to reform the Royal Mint. Pole had favoured retaining the guinea, but instruction to the Mint came with an indenture dated February 1817, directing the Royal Mint to strike gold coins weighing 7.988g, the One Sovereign.

in 1816, Pole hired Pistrucci to create models for the new coinage. He created a head, in jasper, of King George III, to be used as model for the sovereign and the smaller silver coins. He had prepared a model in wax of Saint George and the Dragon for use on the crown; this was adapted for the sovereign. The Royal Mint’s engravers were not able to successfully reproduce Pistrucci’s imagery in steel, and the sculptor undertook the engraving of the dies himself.

Pistrucci’s original design of St. George and the Dragon, created in 1817, is one of the worlds most recognised and respected coin designs, having appeared on almost all sovereigns struck since that date, and was described by coin expert and Oxford University numismatic lecturer Humphrey Sutherland as, “one of the noblest innovations in English coin design”. In 2017, 2018, 2019, and 2020, an interpretation of Benedetto’s original masterpiece was exclusively created by his great-great-great grandniece and fellow artist, Angela Pistrucci.

In keeping with the traditions of the Sovereign since 1489, with its Latin inscription; ELIZABETH • II • DEI • GRA REGINA • GIBRALTAR, which reads as; • ELIZABETH • II • BY • THE • GRACE • OF • GOD  QUEEN • OF • GIBRALTAR • and sizes, the New Gibraltar Sovereign design does not include a denominational value as each coin is determined by its size, weight, and diameter. The Obverse depicts the Raphael Maklouf Queen Elizabeth II effigy created in 2016 to commemorate Her Majesty’s 90th Birthday.

Gibraltar, along with Tower Mint and our marketing partners, Samlerhuset Group launched a brand new series of St. George and the Dragon Sovereigns deisgned by Angela Pistrucci, starting in 2017, two centuries after Benedetto – her great-great-great-great-uncle – created the iconic design for the Royal Mint.

In keeping with the previous editions of the Gibraltar Sovereign, the reverse designs depict the scene of St. George battling the Dragon, surrounded by the Latin inscription, HONI • SOIT • QUI • MAL • Y • PENSE, which translates to SHAME • ON • HIM • WHO • THINKS • EVIL • OF • IT.